The second interview in association with the release of the Manufacturing Growth Network’s North East Manufacturers Growth 50 list is with Dr Arnab Basu, founding chief executive of Kromek.

Insider will be interviewing the leaders of other growing North East manufacturing businesses over coming months, delving into the growth strategies of these businesses and exploring how they aim to build and sustain this growth in the future.

Kromek saves lives and makes people safer. That’s not the official strapline for the Sedgefield-based technology developer and manufacturer but it’s a good summation of what the company ultimately does. Insider spoke with Arnab Basu, the founding chief executive, about the company’s amazing growth journey.

Arnab Basu has been running the business from Day One. In 1996, he came to the UK from India to study materials engineering at Northumbria University. On graduating he was offered a research position at Durham University, working towards a PhD while at the same time marketing the university to overseas students.

After a stint in London working in investment banking, Durham University invited him to be the founding ceo of a spin-out company. So in May 2003 he returned to the North East to set up the company (initially called Durham Scientific Crystals). Basu took up the story: “The university had developed a technique to manufacture Cadmium Zinc Telleride (CZT), a compound semi-conductor material which is a digital and colour detector of x-rays and gamma rays. Although it was a very difficult material to make, it had a patent and the assurance of investment from Professor Max Robinson, so I was happy to take it on.”

After a couple of years of manufacturing and selling the material directly to customers Basu realised the market didn’t at that time really know how to use it. “The perception in the market was that the technology for the material didn’t really work which meant the company’s business model didn’t work either. So we changed the focus and started to develop a more integrated solution.” But changing tack required an enormous amount of capital and, struggling to raise money in the UK, Basu decided to go to the US and successfully raised around $2m from a US fund.

It was a totally unforeseen occurrence that changed the emphasis once again – the liquid bomb plot of 2006. Overnight the way people travelled changed, no liquids were allowed through airport security and the 3-1-1 liquid bags started to be used (and are still in use today) and Basu saw an opportunity to scan liquids and identify potential dangerous elements within them. So the company created some IP and created the bottle scanner.

“Airports are all about getting people through security as quickly as possible”, explained Basu. “If you can prevent false alarms by having better, more reliable detection then it’s not only a faster process, it’s also a cheaper process. Better process efficiency and better decision-making and lower operational costs are what our detectors provide.”

By 2010 Kromek had started doing business with the US Government because of the unique capability of CZT and developed the GR1, a handheld gamma ray spectrometer used to identify nuclear material. Then the following year the Fukushima nuclear power plant accident happened. And this was the trigger for Kromek’s nuclear business.

In 2014 it won a contract to work with the US Defense Advanced Research Projects Agency (DARPA), the agency that is behind nearly all large-scale technological projects. “The US had a problem with nuclear security which was primarily done by protecting points of entry and exits which were vulnerable to attack, and they needed to build a very large network of small and wearable detectors.

“But there were two challenges to this: they needed to be the best quality and they needed to be ten-times cheaper than the equivalent detectors. We were one of the two companies tasked with supplying 10,000 detectors by 2014. By 2017 we were the sole supplier into the programme – we developed detectors which are now in full operational mode, selling the product in 18 different countries. And we see this as a $1bn revenue opportunity for us.”

“The world is changing towards digital and colour, and we are the only company which offers a ready solution that others can integrate into their systems very quickly and go to market.”

The other side of the Kromek’s business is focused in the field of nuclear medicine, specifically diagnostic imaging technology used in the detection and isolation of certain diseases, including cancers. “Every hospital in the Western world uses SPECT (single photon emission computed tomography) technology for its diagnostic imaging.

“But the world is changing towards digital and colour, and we are the only company which offers a ready solution that others can integrate into their systems very quickly and go to market. We provide the lowest risk and lowest investment route to market. And this diagnostic imaging market is a $bn one for us in the next ten years for us.

“This means we have two very big growth pillars in front of us – the radiation detection business and the medical diagnostic imaging business. These – together with all the other products we supply to various markets – are the big, serious business areas for us with real growth potential.” 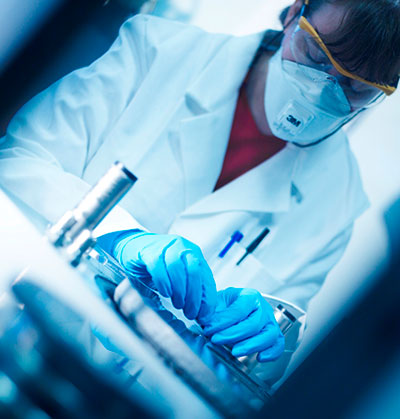 The micro-drivers of this are very strong – there is a massive global middle-class emerging that sees healthcare as a big issue and this a growing market that needs serving. There is also endemic under-investment in western healthcare since the last financial crisis which, according to Basu, has to pick up. “The global political landscape is shifting too, with governments becoming more inward-looking and as borders get harder so the spend on security and defence will increase.”

2013 was very much a landmark year for Kromek as it was the year that it floated on the London Stock Exchange. Since the IPO the company’s average growth has been over 30 per cent year-on-year and the business now employs 140 people, equally split between the North East and the US, 75 per cent of which are graduates including 15 PhDs.

“And we continue to grow at a very rapid pace, “ added Basu. “We have secured $80m worth of contracts in the last fiscal year and $145m in the last three years, so we have a very strong pipeline. We now operate over eight time zones, out of two manufacturing facilities – one here and one in Pittsburgh – and we sell into more than 40 countries.  But operationally it’s a challenge to manage two or three sites in different time zones, with different cultures. Although we speak the same language as they do in America, the culture is very different.”

To cope with the increased demand, Kromek is currently investing around £8m in expanding the capacity of the NETPark site, which includes the automation into certain production lines and adding a large number of furnaces at the same time. All this is likely to be installed and operational by October this year.

Arnab Basu is very much the face of Kromek and much of the success of the company to date is thanks to his vision and hard work. He commented: “I spend a lot of time away from the UK but I have a very strong management team and my ethos has always been to bring in people who are better skilled than me, especially in their own field of expertise. I have always tried to recruit the best possible people that I can afford and that’s how I build teams. Leaders need to articulate a vision, then need good people to put this vision into action.

“Skills will undoubtedly become a very big issue for the UK. For us, if we want to keep on with our R&D commitment we need to have the right people to do it. And that does mean having the ability to attract the best and brightest talent available from around the world. And we need to provide the right environment for them to live, work and prosper.”

Working on complex technology used in globally significant projects that are saving lives and making people safer must surely help.

Talk to one of the team today